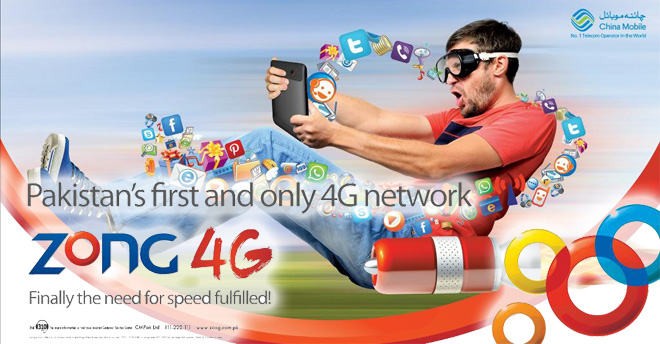 After four months of announcement, Zong is all set to launch 4G services in Pakistan. According to sources the trial services will be announced and start tomorrow in an event in Islamabad. It is expected that initially the Zong 4G services will be available in select regions of the big cities such as Lahore, Karachi and Islamabad.

Months back in the auction Zong was the first and only mobile network in Pakistan which was enlisted as 4G enabled network in the country. However the 3G services from Zong and other networks were started little after that, 4G services were due from Zong.

For your kind information you are going to need to have a 4G enabled SIM as well as a 4G/LTE enabled smartphone to use 4G services. Also it’s expected that the trial services of 4G will be free of cost just like they were with 3G for promotions.

We have been invited and we’ll cover the Zong event tomorrow and will be updating you likewise. Keep your eyes on here.

On the other hand Warid Telecom with their already held licensed spectrum for the said services has reportedly been testing their 4G services with employees. They were to launch their 4G services publicly in September too as per their open letter and sms broadcast to their valued customers but has not yet announced the exact date plan.