While it’s not a global launch, but Samsung left nothing to introduce its latest flagship smartphones Galaxy S6 and Galaxy S6 Edge in Pakistan. Yesterday Samsung introduced both of the smartphones in an event held in Lahore.

The ‘blue carpet’, as it was called, was hosted by the young and talented television anchor, Hifza Shah Jilani and the suave Faizanul Haque.

With the ideal combination of glass and metal, the Galaxy S6 boasts of a damage-resistant Corning Gorilla glass-4 and a special metal that makes it 50% stronger than all other smartphones. It is enriched with a 16MP, OIS rear-camera and a 5MP front camera, offering 60% brighter and crystal-clear imaging with f1.9 lens and HDR. 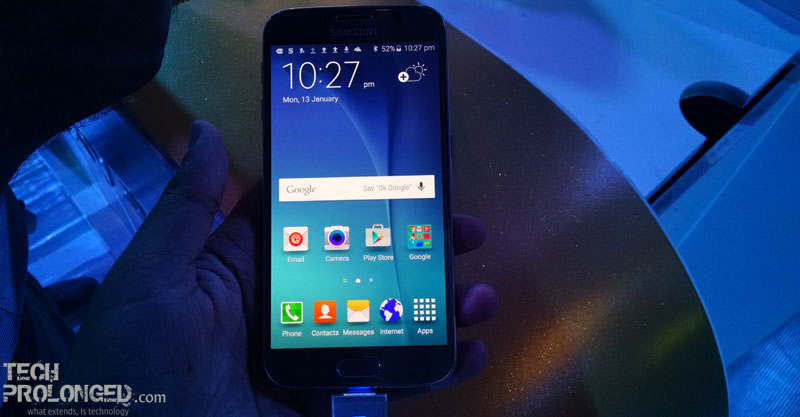 The curved, dual-edged screen of the Galaxy S6 Edge provides quickest access to frequently used apps and alerts, all with the swipe of a finger, even when the screen is locked. Users can also receive notifications directly on the ‘Edge Screen’ while watching videos.

Checkout the hands-on with the new Samsung Galaxy S6

An innovative ‘networking zone’ was also established at the event where guests were given first-hand experience with Samsung mobile phones.

An interesting concept at the event was that the six unique features of the new Samsung phones were introduced to the audience by six different personalities: Security and enterprise by Samsung Product Manager Mr. Hassan, its design by fashion designer Maheen Kardar Ali, camera features by comedian/singer/actor Ahmed Ali Butt, display qualities by supermodel and actress Sabeeka Imam and battery by cricketer Shoaib Malik.

The event did not just witness the unveiling of the Samsung’s latest product, but some exciting entertainment too in the form of musical performances by Josh the band and Shafqat Amanat Ali Khan in the middle of whose performance renowned designer Rana Noman showcased his latest

Checkout the full list of photos from the event below.