We are not going to compare both devices directly but following are the specifications of camera modules from both devices which can help you make an idea about the little differences.

After experiencing I can tell that Nokia really took care of the build of Lumia 1020 with the following things in mind, to put as bigger resolution sensor as it was in Nokia 808 PureView, keep the device as much slim as people won’t have an excuse of rejection. So to keep the device slim Nokia used sensor of size of 1/1.5” that is smaller than Nokia 808 PureView’s 1/1.2” sensor.

Chart showing the sizes of the sensors of Nokia 808 PureView’s 1/1.2″, Nokia Lumia 1020’s 1/1.5” in comparison of those found in compact cameras and the one commonly used in mobile phones.

Well smaller sensor with the desire of same resolution as of 808 PureView’s, also restricted Nokia to use smaller pixels size. So with smaller sensor size and then smaller pixel size, theoretically the Lumia 1020 won’t be able to reduce as much noise as Nokia 808 PureView did, however should do great in comparison with other smartphones. As well the addition of Optical Image Stabilizer in Lumia 1020 will do much better with steadiness in low-light when slower shutter speeds are used as well as it also helps reducing digital noise at much extent. Other creativity also comes along with slower/longer shutter speeds. We’ll see in the later section below with the camera operating interface and options.

Bigger on the Back 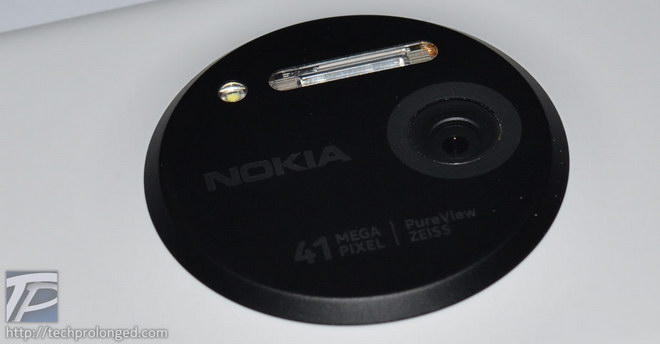 If it suites your photography desires, then you won’t feel any bad with the big camera housing on the back of Lumia 1020. The big circle extruded on the back contains all-in-one camera components including single LED bulb to support video recording in lowlight when indoor with a small range. It also can be used for torch light in dark. Xenon flash for still photography indoor when needed in low-light to freeze a moment or to fill the deep spots. Carl ZEISS lens with OIS is perfectly noticeable when moving to keep the image steady.

I really believe there has been enough technical information about Lumia 1020’s camera. we should be going forward with the camera user interface and photo/video results for end-users