Launched this July, Nokia Lumia 625 is the last one in the family. Nokia hasn’t announced any other Lumia device after this bigger Lumia. Lumia 625 lies between the low cost and mid-range class of Lumia family, a successor to Lumia 620 but with the largest screen ever found on a Lumia smartphone or on any Nokia device so far.

After the 2 months of the global launch, Nokia Pakistan brought the Lumia 625 to Pakistani market. We also had an unboxing session posted earlier and now the full review of the device is going down.

Before we go on with the hands-on review, why not take a look at the key features of Nokia Lumia 625.

Nokia Lumia 625 is successor to the Lumia 620 and sure has a little few improvements costing around 5,000/- more than its predecessor. Let’s start with the bigger and prominent factor of Lumia 625, the display.

Well, when looked straight into the eyes of the display, it doesn’t seem to be blushing in front of you and give you the good enough display but it obviously is not the AMOLED/ClearBlack display like on the high-end Nokia smartphones including Lumia 1020, 925.

Yet, Lumia 625 is equipped with Gorilla Glass 2 to protect the display inside. The display is IPS LCD and that even is without the ClearBlack, not giving you more than a single viewing angle specially outdoors. That’s not above average.

Above shots were taken under a roof with no direct sunlight but it’s all with natural light coming from front only. Let’s take a look at Lumia 625 under direct sunlight below. Following is Lumia 625 lying down with the high-end Lumia 925.

While we can’t compare the two devices above but it’s just a reference how does the Lumia 625 can perform when you look at it outside in the crowd. Would you be able to just see and know what’s on it or you will try to cover the screen with your other hand. Well, you will mostly look at it straight and not from the sides of it, so it will do the job for you no matter a little hard way.

Second thing, the display won’t be appreciated for, is the WVGA resolution of 480x800px. The resolution itself is not bad and has been shipped on a lot more devices than the newer high-res displays. But we are talking, the WVGA on the display size like of 4.7 inches on Lumia 625. It delivers 201 PPI (Pixels Per Inch) which comparatively is much lower density than its predecessor which served 246 PPI on 3.8 inch screen.

Well it all comes to the consumer’s point of view how they take it. I personally have noted amongst many. The even don’t know about the capability of the display resolution and what’s better for their eyes. What they concern about is the screen size. Nokia just targeted those consumers who want bigger screen in low budget. But you really should consider the pixels density on a screen which suites you.

The touch sensitivity on the screen is just the same as being delivered to all Lumia devices after Lumia 920 and 820. It responds to the gloves you are wearing and even the fingernails specially targeting women with long nails.

Software wise, Nokia has provided Lumia Colour Profile in the settings which lets you set colour temperature and colour saturation according to your suitability. 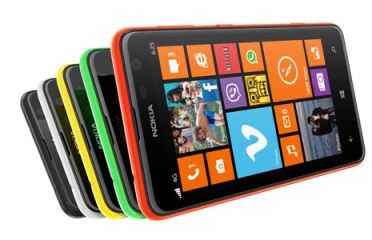 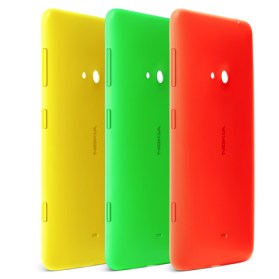 Starting to look at its components, the top side of the phone hosts only the 3.5mm audio connector with nothing else besides. While on the right side of the phone, the volume up/down button, the power/lock/unlock key and the dedicated two-step camera shutter key.

Long pressing the camera shutter key wakes the phone up if it’s locked and brings up the camera UI.

Back panel of the phone hosts the camera module along with the LED flash. Nokia branding is printed in the middle. A little wide hole is provided on the back cover for loud speaker outlet. The filter is also pasted inside the back cover to help protect the inner components from the dust.

The upper side of the front glass hosts earpiece in the center with the Nokia branding under it and the front facing camera on the right-upper corner.

The lower part of the screen comes with the Windows Phone 8 standard Back, Home and Search touch sensitive keys.

Inside From the Back:

The outer/visual design of the Nokia Lumia 625 is not much unique or different than other low-end, mid-range Lumia devices. What makes it rather much different than any other smartphone is after opening the back cover. The back cover is in fact removable and replaceable but the battery is not user-removable. It’s hard packed within the inner body yet not hidden.

The battery compartment is covered with the body panel. However the SIM card slot and the micro SD card slot are staked up and down respectively on the side of the body with push-in style. Just push the SIM card and/or memory card in and cover it up with the back cover.

Nokia Lumia 625 can be introduced as a bigger screen contender a quick reference. It’s the only device from Nokia having that big screen size. Even the flagship Lumia 1020 does not support that. But the display quality does really not impress us or could anyone out there. We would appreciate if the ClearBlack tech from Nokia was there on the Lumia 625. It all goes to the resolution disturbance.

Well it’s only first time Nokia tried a very low resolution on the bigger screen, other manufacturers have done it already with most of their low-end devices for just to give bigger screens to the consumers. So the blame is not for Nokia anyway. If you are one of the consumers they targeted, it suites you.

Windows Phone 8 OS features are alike but low-end devices support a little less list of apps and features. Like “Lumia Amber” software update which brought most of the appreciable visual features like “Glance Screen” won’t be supported on Lumia 625. However the sms and calls blocker will be there.

As told before, Lumia 625 comes with the features from its predecessor Lumia 620 and from the mid-range Lumia 820 but also lacks features like NFC that was even supported in Lumia 620. The price you will have to pay for it is Rs. 30,000/- in Pakistan with one year warranty. If you think the bigger screen is not your option, then you can go with the other Lumia from the same class or mid-range ones.

You can have a quick look at the images in the gallery below.